ASC 842 and Why It Matters for Private Companies 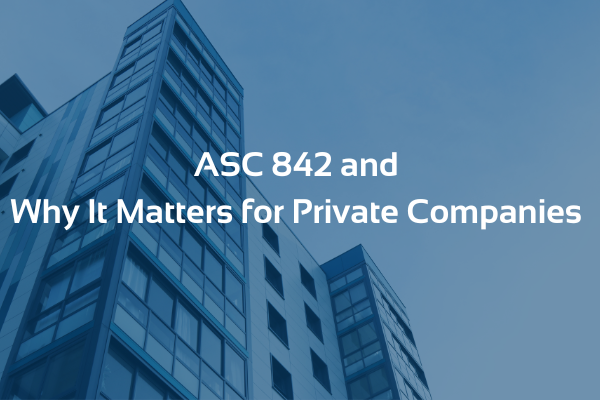 The lease accounting standard ASC 842, which was postponed for non-public companies due to COVID-19, also known as Leases (Topic 842), is going into effect for many companies this year. So, what is ASC 842 and what does it mean for your company going forward if you plan on adopting the standard?

The origins of ASC 842 begin all the way back in 2016 when the Financial Accounting Standards Board (FASB), the private standard-setting body that establishes and improves Generally Accepted Accounting Principles (GAAP), introduced the update meant to replace ASC 840.

The FASB issued the accounting standards update "to increase transparency and comparability among organizations by recognizing lease assets and lease liabilities on the balance sheet and disclosing key information about leasing transactions."

Under ASC 840, the original lease accounting standard, leases were categorized as either capital or operating leases. It also created a technicality where leases could be reported in the footnotes of financial statements. Now, under ASC 842, leases must be reported on the balance sheet, which facilitates increased transparency.

This also falls in line with the International Accounting Standards Board IFRS 16 leases update from 2016, which required all leases to be reported on a company's balance sheets as assets and liabilities.

Originally, IFRS 16 was intended to be a collaboration between the FASB and IASB but there were some differences between the boards on specific issues. Instead of a collaboration, IFRS 16 and ASC 842 were created. You can read about the specifics of IFRS 16 here.

The AICPA has a handy graphic to make sense of the FASB's not-so-clear language. Your company's compliance date depends on when your fiscal year begins.

What's Considered a Lease Under ASC 842?

According to the AICPA, this will apply to any entity that enters into a lease as well as sublease of property, plant, and equipment. This means ASC 842 accounts for just about everything you might consider a lease but it does not apply to the following non-depreciable assets:

These leases are accounted for under various other ASCs.

Due to the different compliance dates between private and public entities, ASC 842 has already been implemented in many public companies. This has given us a handle on the best ways to manage ASC 842 implementation and audits, as well as the challenges companies will face.

The survey found that the standard updates were working as intended, providing increased transparency into lease assets and liabilities, as 58% of the companies polled found embedded leases.

But of course, transitioning all of that new lease information onto the balance sheet required a bit of extra effort. According to the survey, out of those who have completed their first post-transition audit, over 50% reported reasonable to significant additional effort was needed.

Oof. It's no surprise, as LeaseQuery and Encoursa's survey also found that the average balance sheet lease liabilities increased by a whopping 1,475%. That is a lot of legwork. So, how can you prepare for ASC 842?

If you're one of the non-public entities that haven't yet adopted the new standard and plan on implementing it, there are some measures you can take to prepare for the increased workload and looming audits.

As a full-service accounting and business advisory firm, we offer a number of services that can help companies successfully adopt ASC 842. Our Business Advisory Services can help you streamline your operations to ensure ASC 842 is incorporated correctly. We also offer Audits, Reviews, & Compilations so you can see what exactly is needed to make your business compliant with ASC 842.

Ready to work together? Let's Talk!